During the evening of 6th March 1987 MS Herald of Free Enterprise, a Townsend Thoresen branded RORO passenger and car ferry owned by European Ferries capsized shortly after sailing.  The ferry left the Belgium port of Zeebrugge bound for Dover.  At 1920 hrs the vessel passed out of the inner breakwater and in to the shipping channel, by 1928 hrs she had capsized.


At 1927 hrs the helmsman reported that the vessel wouldn’t respond. Her master immediately put the engines to astern.  Unfortunately by this point the vessel was already listing 30 degrees to port and this had no effect. The vessel righted for a moment before capsizing to port and settling on a sandbar on her side, the sandbank prevented the ferry from completely sinking in deeper water. The water reached the ship’s electrical systems and destroyed both the main and emergency power which left the ship in complete darkness.
At the time the ferry capsized there were 459 passengers and 80 crew members on board and she was carrying 81 cars, 3 buses and 47 lorries.  Most of the passengers were relaxing in the passenger lounge or in the cabins below deck.  There were also 4 lorry drivers asleep in their cabs in the bowels of the ship.  When the vessel began listing this alerted the passengers in the lounge that there was a problem, unfortunately due to the speed of the capsizing there was no time for the passengers to act. The lights went out and water began to pour in.
Several crew members aboard the 1968 built dredger SANDERUS saw the capsized ferry and at 1936 hrs the Captain alerted the port authority at Zeebrugge.  Upon receiving this notification the port authority activated its harbour rescue plan.  Tugs surrounded the Herald and a team of divers were delivered to the ferry by helicopter within thirty minutes. The Belgian Navy were on exercise in the area and also assisted in the rescue operation.
The dive crew leader Lieutenant-commander Guy Couwenbergh entered the passenger lounge to begin the rescue operation. The ladder that the soldiers had brought was too short to reach down to the passengers so Couwenbergh instructed his divers to find rope. The rope was lowered in to the cafeteria and tied around a passenger who was then hauled up and through the window.  This process was laborious and the passengers were weak from exposure to the cold water.  More windows were smashed and ropes lowered but many of the passengers were too weak to climb up them.  A wicker basket was found to haul up the children.
The accident resulted in the deaths of 193 people, most of whom succumbed to hypothermia.
The history of two small towns on opposite sides of the Channel were changed forever following the capsize and loss of the Herald of Free Enterprise in the frigid waters off the Belgium port of Zeebrugge.
There were many stories of horror and heroism from that fateful night and it doesn’t matter how much time passes, it doesn’t matter what takes place in the meantime, there are some things we can never forget, there are memories we can never erase.
To the 193 souls that were lost that night, you will always be remembered and may you rest in peace. 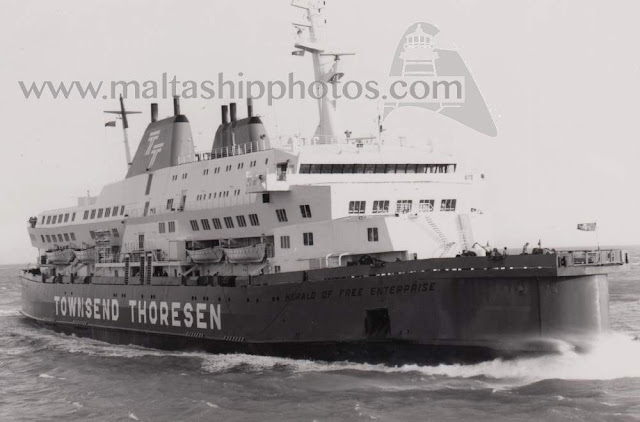 On 6th March 2012 a memorial service was held at St. Mary the Virgin church in Dover to mark the 25th anniversary of the disaster.  The service was organized  by the Sailor’s Society and was attended by more than 250 bereaved families and friends as well as survivors of the disaster.  During the service the names of all the 193 passengers and crew who perished in the disaster were read out, it took over 10 minutes to read the list and stars were handed out on which the congregation wrote messages which were later transcribed in to a book of remembrance.
A memorial garden with 25 white roses was created on the seafront at Dover to mark the anniversary .  After the church service the garden was dedicated and flowers were cast in to the sea in remembrance. 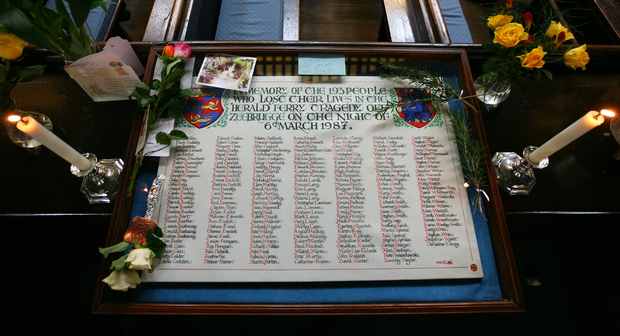 Photo of the ferry by Capt. Lawrence Dalli. Do not use this image without my permission. © All rights reserved. Malta Ship Photos & Action Photos – www.maltashipphotos.com