On Sunday 23rd February 1964 the Italian Navy commissioned the Andrea Doria Class Helicopter Cruiser C553 ITS ANDREA DORIA CARLA. She was built by CNR, Riva Trigoso as Hull Number 248.
Ordered in the 1957-58 Naval Programme, the Andrea Doria class were designed to operate the RIM-2 Terrier surface to air missile (SAM) system and Sikorsky SH-3 Sea King helicopters as both a platform for anti-air and anti-submarine warfare. The hull was based on the IMPAVIDO Class, with a length of 149.3 metres and an enlarged beam to allow for the installation of a flight deck and hangar, measuring 17.3 metres. She had a draught of 5.0 m and displaced 5,000 tons standard and 6,500 tons loaded.
The cruisers were also equipped with six 324-millimetre (13 in) Mk32 torpedo tubes in two triple mounts. These were for use against submarines.In conjunction with the torpedo systems, the Andrea Dorias could embark up to four helicopters. The Sea Kings were found to be too large for the class and the Italians instead chose to use Agusta-Bell AB212 helicopters modified for anti-submarine warfare. 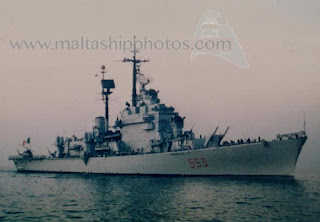 Below image is of the cruiser moored at Valletta (Grand Harbour), Malta back to 1969 – 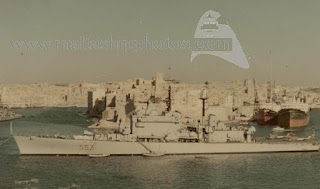