The 1999 commissioned multi mission stealth frigate of the French Navy FS ACONIT F 713 called off 3 miles North East off Valletta (Grand Harbour), Malta on Wednesday 17th January, 2018 for a conveyance service with Pilot boat FOXTROT from 2231-2247 hrs. Originally to be named FS JAUREGUIBERRY she’s now the Fourth in her class and the Fourth French Vessel to be renamed as ACONIT.

In 2011 on 12th April she was due to call to Valletta for berthing inside during her deployment at Operation Unified Protector (OUP) Mission but her call was CANCELLED.

Interesting to say that her AIS was transmitting as UE WARSHIP and her destination was – EYE ON BENIN TTW. 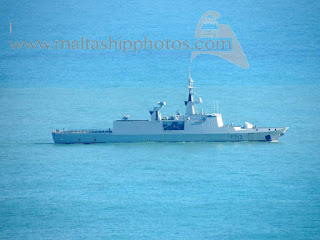 Above Photo of the frigate by our correspondent Peter Szamosi and the image of FOXTROT by Capt. Lawrence Dalli.  Do not use these images without my permission. © All rights reserved. Malta Ship Photos & Action Photos – www.maltashipphotos.com