The ALGOMA NIAGARA, the first of two new Equinox class self-unloading lake bulk carriers from a Chinese shipyard arrived earlier during the early days of November 2017 after  making her  two-month journey to Canada according to its owner, Algoma Central Corp.
The ALGOMA NIAGARA is the first of two new Equinox-Class 740-foot self-unloaders being built at Yangzijiang Shipyard and she will be joined by her sister ship, the ALGOMA SAULT during the first half of 2018. She’s the formerly NANTONG MINGDE MD161 SUL 07.
It will be the fifth Equinox-Class vessel to join the Algoma Great Lakes fleet, the company said.
Four Equinox-Class gearless-bulkers are already in operation in the Algoma fleet servicing the company’s grain and iron ore customers.
Algoma, the release said, has developed a strong partnership with Yangzijiang Shipyard over the past two years.
“In addition to the new 740-foot self-unloaders being built at Yangzijiang, the shipyard also completed the fit-out of the Algoma Strongfield after the ship was acquired from the bankrupt Nantong Mingde shipyard early in 2017.”
The company said working in partnership with Yangzijiang Shipyard, it recently acquired the partially-completed self-unloader Algoma Conveyor from the same bankrupt shipyard. Yangzijiang Shipyard is completing a refurbishment of the vessel for eventual delivery to Algoma, expected in early 2019. 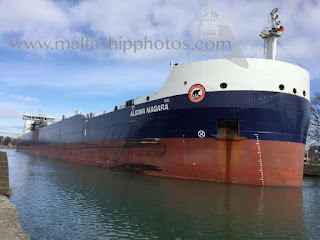 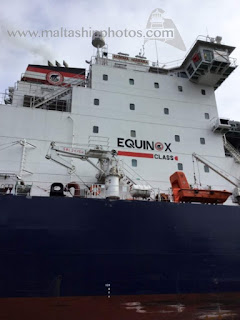 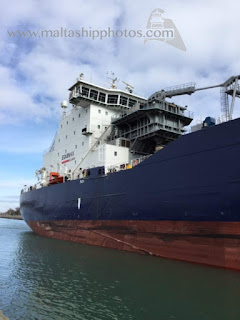 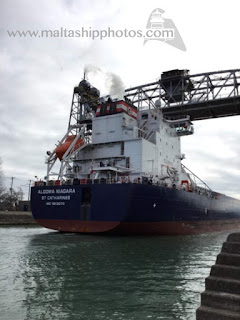 Above images of the vessel passing Welland Canal, Port Colborne, Canada
All Photos by our correspondent Nathan Attard. Do not use these images without my permission. © All rights reserved. Malta Ship Photos & Action Photos – www.maltashipphotos.com