The 2004 built Ocean Towing/Salvage Tug SALVANGUARD owned by POSH Terasea Offshore Pte Ltd is underway from Gdansk, Poland to Dubai towing the 248.12 m Floating Production Storage and Offloading (FPSO) AOKA MIZU.
On August 8, 2016, the AOKA MIZU arrived at Remontowa Shiprepair Yard SA in Gdańsk. The FPSO had appeared in coastal waters of Gdańsk Bay already on the 6th of August, however due to extremely harsh weather conditions on that day, the vessel was towed to Remontowa two days later, on Monday in the evening.
The FPSO Unit is 248,12 m long, has a 42 m moulded breadth and a 21,2 m moulded depth. It has a 14,9 m design draft and a deadweight of 105,000 t. The vessel has a 7,985 m2 deck area, a 6,000 m2 topsides and a 8,000 t deck payload. It can accommodate 90 persons.
She is a next generation Bluewater designed, built, owned and operated FPSO. The hull was newly built at the Hitachi Zosen Shipyard in Japan (in the years 1998 – 1999) and directly adapted to be finished as an FPSO (in the Singaporean Sembawang yard, 2006 – 2008), by integrating a turret moonpool, a foundation grillage to support process topsides and hull upgrades for higher ultimate strength and fatigue capacity.
The FPSO is DNV GL classed. Class Notations: + 1A1 Ship- Shaped Production and Storage Unit with the additional Notations POSMOOR, Crane, Ec0, HELDK-SH, DYNPOS- AUT, UKVS.
Below photos are of SALVANGUARD underway in the Suez Canal which was cleared today Saturday 9th September after 2100 hrs with ETA Dubai as Friday 29th September, 2017 towing the FPSO Unit which is going to be upgraded at Dubai Dry Docks. Photos are courtesy of Capt. Neil M. Johnston, Master of SALVANGUARD. 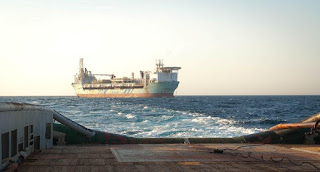 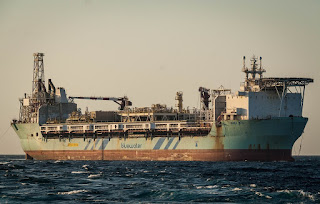 And the following of SALVANGUARD engaged in towing operations back to  20th March, 2015 offshore Malta – www.maltashipphotos.com 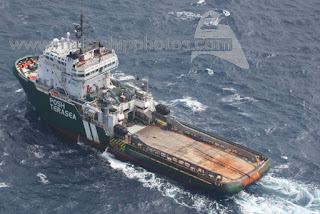 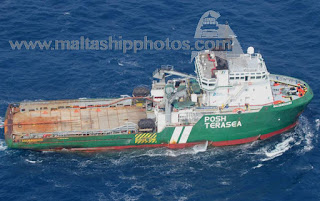 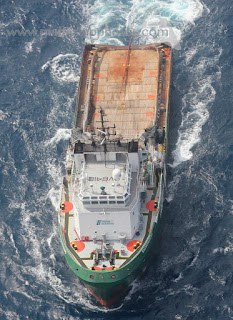