French shipping group CMA CGM plans to build nine of the world’s largest container ships at two Chinese shipyards, the state-run China Daily newspaper reported on Wednesday.
Shanghai Waigaoqiao Shipbuilding Co confirmed that it and its sister yard Hudong-Zhonghua Shipbuilding (Group) Co, had received a letter of intent from CMA CGM for the ships, which would be capable of carrying 22,000 20-foot equivalent unit containers (TEU), the newspaper said.
The final order was subject to board approval from both sides, the newspaper said. Both yards are owned by state-run China State Shipbuilding Corporation.
CMA CGM did not immediately respond to a request for comment. Calls to Shanghai Waigaoqiao Shipbuilding and Hudong-Zhonghua Shipbuilding outside office hours were not immediately answered.
Should they be built, CMA CGM’s 22,000 TEU vessels will leapfrog the OOCL Hong Kong to take the crown of the world’s largest container ships. The OOCL Hong Kong has a carrying capacity of 21,413 TEU.
Global container shipping lines in recent years have been competing to build the biggest ships in order to gain economies of scale to slash shipping costs. However, such mega-ships are also being blamed for contributing to the overcapacity glut plaguing the container industry. 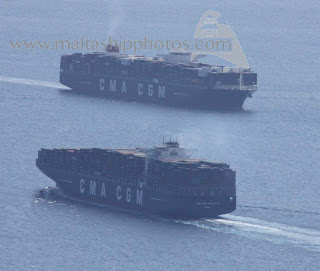