Ship of the Week – AL HUSSEIN.

Car and passenger ferry built by Hall, Russell & Co, Aberdeen, that entered service, Mallaig to Armadale (Skye), in 1964 for David MacBrayne as Clansman. In 1972 she was rebuilt so that she could carry larger lorries, involving heightening her and giving her a new bow door. Then Ullapool to Stornoway service and, from 1977, reserve ship but chartered to P&O for Northern Isles service in the winters. Sold in 1984 to Torbay Seaways for new Channel Islands service but was not suitable and sold on to Mira Shipping of Malta and renamed Tamira for a Malta-Gozo service that also never materialised. Sold again and employed in the Gulf of Aqaba and renamed Al Hussein, then sold and renamed Al Rasheed in 1986. By 2002 she was lying abandoned off the coast of Sudan. 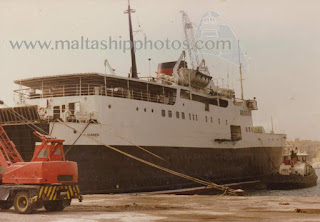