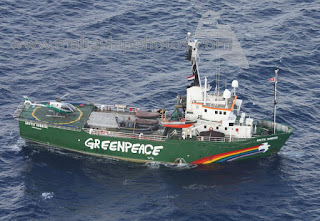 Image of ARCTIC SUNRISE with IMO 7382902 anchored at Bunkering Area 1, Malta back to 2nd June 2010 – www.maltashipphotos.com
Norwegian authorities have detained Greenpeace vessel ARCTIC SUNRISE after a protest at a Statoil contracted drilling rig at Norway’s northernmost oil field in the Barents Sea, the environmental group said in a statement.
Greenpeace said the vessel and 35 activists were unlawfully detained after entering the exclusion zone of Statoil’s Korpfjell well, halting drilling operations for the ssdr SONGA ENABLER. The ship, activists and crew members were all arrested by the Norwegian Coast Guard, the group said.
Greenpeace said it hopes the protest will send a message to the Norwegian government to stop oil drilling in the Arctic.
“Just 10 days before ratifying the Paris Agreement, in June 2016, the “environmentally friendly” Norwegian government granted new oil licenses. Now, a year later, Statoil has just started to drill for oil in the northernmost area ever licensed by Norway,” the group said.
In 2017, Statoil had scheduled to explore five licenses in the Barents Sea, including the northermost Korpfjell well. Exploration drilling will take place in the period from May to September using the SONGA ENABLER, a floating, self-propelled rig purpose-built for cold climates and operated by Songa Offshore.