A fire broke out  aboard the 39 metre motor yacht IF ONLY  earlier on August 17th as the vessel approached Nice, France. Local enforcements were quickly on scene and managed to secure all guests and crew before continuing to fight the fire. There were 11 people on board, including 7 passengers and 4 crew/ Passengers evacuated, crew remained on board to fight fire. Firefighters, SAR boats and even helicopter were deployed in firefighting. No news yet on yacht damages.
Built by Feadship as the WALANKA and launched in 1974. IF ONLY  underwent a major refit in 1989. This steel and aluminium yacht can accommodate a maximum of eight guests and nine crewmembers. with Italian Flag. 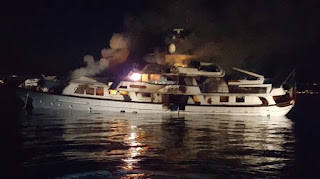