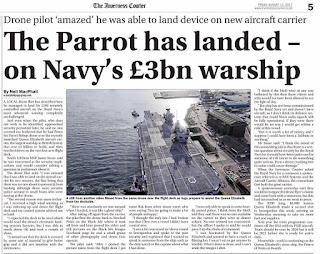 An amateur drone pilot has sparked a security review of Britain’s biggest and most technologically advanced aircraft carrier after landing his handheld drone on the deck of the carrier while it was docked in Scotland.
The unidentified pilot told British media that he conducted a flyover of the HMS Queen Elizabeth using his DJI Phantom drone when it was docked Invergordon in July.
During the flight, the drone even made an emergency landing on the deck of the carrier due to high winds, but it was able to take off again after the pilot snapped a few pictures. The pilot posted the footage on a local drone photography Facebook group on Friday morning, but the footage has since been taken down.
https://youtu.be/10wYWKUq2e8
Speaking anonymously to the media, the pilot said he was surprised that his unauthorized flight went completely unchallenged by the authorities, which he says exposes a potential gap in security. The pilot even told security guards at the gate of the shipyard, but apparently even the guards weren’t all that interested.
“I would say my mistake should open their eyes to a glaring gap in security. This was a bit of tomfoolery but it could have been something terrible, not just for the ship and its crew but for the people of Invergordon,” the pilot said, according to a BBC News report.
“I gave them my name and telephone number and expected someone to get back to me,” he said. “I thought I would be hauled in and have my footage confiscated. I could have been anybody. I guess they weren’t really bothered because the ship isn’t active yet.”
A spokesman for the Ministry of Defence said: “We take the security of HMS Queen Elizabeth very seriously.
“This incident has been reported to Police Scotland, an investigation is under way and we stepped up our security measures in light of it.”
The HMS Queen Elizabeth was in Invergordon for sixteen days in July for replenishment and repairs before returning to sea trials.
The 65,000-tonne carrier, the biggest warship ever to be built in Britain, has been undergoing sea trials since setting sail from Scotland’s Rosyth dockyard in June. The aircraft carrier is expected to make her historic arrival into Portsmouth this Wednesday, where she will be the latest in a long line of famous Royal Navy ships to call the port home.
It is unclear if the drone pilot will face any punishment as a result of the unauthorized flight.
BREACHING SECURITY ISSUES IT’S ILLEGAL ANYWHERE IN THE WORLD