An English youth aged around 20 years died and six more were grievously injured following an early morning crash between a Red Cross Ambulance and a car in Xemxija.
The head on collision accident happened at Selmun Hill at around 0120 and involved an ambulance driven by a 55 year old Italian paramedic living in Mosta and a Daihatsu Sirion driven by an Englishman whose age has not yet been confirmed. Civil Protection Members from Xemxija Fire Station intervened to assist in releasing the injured from the vehicles
The Daihatsu Sirion was carrying three passengers, all English. The man riding in the car’s passenger seat was killed in the crash, police said, while the driver and the two other passengers are in hospital with grievous injuries.
Persons in the ambulance were also hurt in the crash – an 89 year old elderly woman from Mellieha accompanied by her 51 year old daughter from Mġarr with a  38 year old female member of the society from St Paul’s Bay woman also aboard was slightly injured, as was the ambulance driver.
Magistrate Natasha Galea Sciberras has ordered an inquiry into the incident and appointed various experts to help her investigate. Police investigations are ongoing. 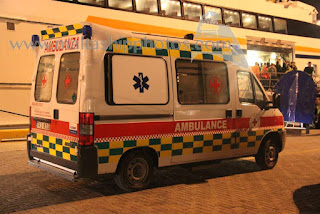 Archived image of RED CROSS SOCIETY Ambulance back in 2011 during the Libyan Uprising – www.maltashipphotos.com