TORONTO, Aug 11 (Reuters) – Certain ships are being ordered to reduce speed because of the deaths of at least 10 North Atlantic right whales in Canada’s Gulf of St Lawrence during the past two months, the government said on Friday.
The deaths have made 2017 the deadliest year for the endangered marine mammal since scientists began tracking their numbers in the 1980s, researchers said.
The ministries of transport and fisheries issued a temporary order for vessels 20 meters or longer to slow to a maximum of 10 knots in the western portion of the Gulf, which stretches from Quebec to north of Prince Edward Island.
There have been an increase in right whales in the area over the last three to four years, said Tonya Wimmer, director of the Marine Animal Response Society.
Human activity has caused at least some of the deaths. Three whales died from blunt force trauma consistent with being struck by a large vessel and one was entangled in fishing nets.
Wimmer said reducing ship speeds can improve the chance of survival for the whales. The whales can weigh up to 96,000 kilograms (105.8 tons).
The order will be enforced by Transport Canada inspectors and the Canadian Coast Guard. It is effective immediately and will be lifted once the whales have migrated from the area, usually by the time of the northern winter. Ships violating the order could be fined up to C$25,000 ($19,706.76).
There are only 300 to 500 North Atlantic right whales left, and despite conservation efforts since the 1930s, there is no evidence of population growth, according to the World Wide Fund for Nature (WWF). 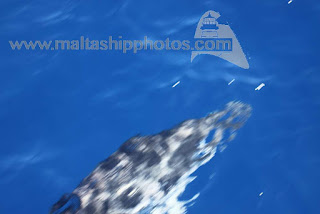 Archived image of a mammal photographed in Libyan Waters – www.maltashipphotos.com