A Spanish Rescue Vessel with Panama (PAN) Flag with three rescued migrants from Libyan waters onboard was finally allowed Wednesday to dock in Sicily after a diplomatic spat between Italy and Malta left her  in limbo. She was granted entry at Pozzallo Port, Sicily after reporting a mechanical problem in her engines.
The GOLFO AZZURRO , chartered by Spain’s Proactiva Open Arms NGO, had rescued the migrants on Sunday in an operation normally coordinated with the Italian coast guard.
But when the Golfo Azzurro approached the Italian island of Lampedusa, the closest to the Libyan coast, Italian authorities denied her passage, saying the rescue had taken place in Malta’s search-and-rescue zone.
Malta also refused to take the migrants, saying Italy was responsible for the rescue.
A Proactiva spokeswoman told AFP the Italians had relented and the rescued migrants would be disembarking in Pozzallo.
The policy confusion followed Rome’s introduction of a controversial code of conduct for charity boats rescuing migrants in the Mediterranean.
Proactiva is one of four NGOs which have signed up to the code, whereas five counterparts operating search-and-rescue activities off Libya have rejected the new rules. 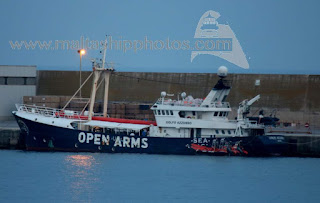