The Airbus Helicopters EC130 B4 Ecureuil / AStar is a 7-8 seat single engine helicopter, powered by a Turbomeca Ariel 2B1 turbine engine. The EC130 B4 (formerly known as the AS350B4) is essentially a development of the AS350B3 at a higher gross weight, with the following changes: an enlarged cabin and cargo compartment incorporating triple front seats as standard and using EC120 type windows; installation of the “moustache” type skid landing gear off the EC120; and utilising an EC135-type fenestron anti-torque tail rotor system.
The Eurocopter EC130 B4 cruises at nearly 230 km per hour. The external noise emission, 8.5dB under the ICAO requirement, is low. The cabin width is 2.03m compared to 1.87m for the AS350 B2 Ecureuil. Thanks to its large access, its spacious cabin and its quiet interior the EC130 B4 is not only suitable for the passenger transport but also as EMS helicopter. Fitted with the appropriate mission equipment, the EC130 B4 can also perform Police and S.A.R. missions. Due to the low external noise emission, the EC130 B4 is in the USA nicknamed ‘Eco Star’.
Below images of the said helicopter with construction number as 3766 embarked on yacht PRINCESS MARIANA berthed at Pinto 3 Wharf, Valletta, Malta back to 15th August, 2004 – www.maltashipphotos.com 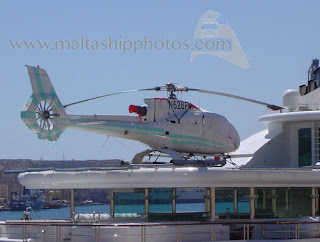 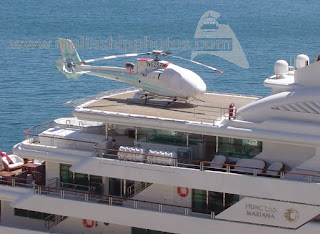 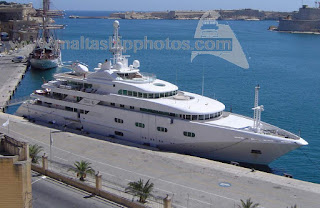