USS OSCAR AUSTIN DDG 79 is an Arleigh Burke Class Destroyer in the United States Navy. Oscar Austin is named for Medal of Honor and Purple Heart recipient Private First Class Oscar P. Austin.
This ship is the 29th destroyer of her class. USS OSCAR AUSTIN  was the 17th ship of this class to be built by Bath Iron Works in Bath, Maine and construction began on 9th October 1997. She was launched and christened on 7th November 1998. On 19th August 2000 she was commissioned at Bath, Maine. The ship is currently part of Destroyer Squadron 26.
She was assisted by tugs AMATZIA (Port Bow) and ELAD (Port Quarter). She was turned around and backed to a prepared space that was set off by a wall of containers on Tuesday 1st August 2017. 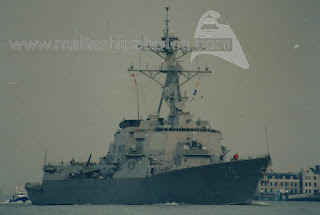 Archived image of USS OSCAR AUSTIN DDG 79 at the Netherlands back to 17th March, 2002 – www.maltashipphotos.com