On Sunday 30th July,2017  the biggest ever drugs seizure along the Indian coast, the coast guard, in a joint operation with Intelligence Bureau (IB) and local police, apprehended a Panamanian ship carrying 1500 kg of heroin valued at Rs 3,500 crore off the Gujarat coast, on Sunday.
As per reports, the supply ship HENRY, was apprehended by Indian Coast Guard Ship 202 SAMUDRA PAVAK, a pollution control vessel.
Sources said, three days back, the coast guard received information from intelligence sources that a big consignment of narcotic drugs was likely to enter Mumbai via Gujarat
The vessel, which was operating under the name HENRY under the Panama flag, was intercepted off the Gujarat coast near the city of Porbandar, said S. Paramesh, deputy director general at the Indian Coast Guard.
She was sailing from Dubai to Alang, a town in Gujarat known for shipbreaking, Paramesh said.
The eight crew members aboard, all of whom were identified as Indian nationals, are under investigation.
See Video here – https://www.youtube.com/watch?v=gin22F-4nvA and https://www.youtube.com/watch?v=sHPDAKi_wJw 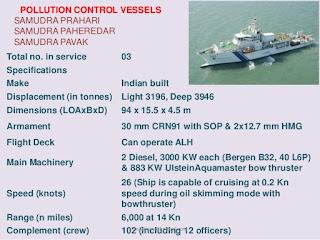